Top Ten Fights in One Piece 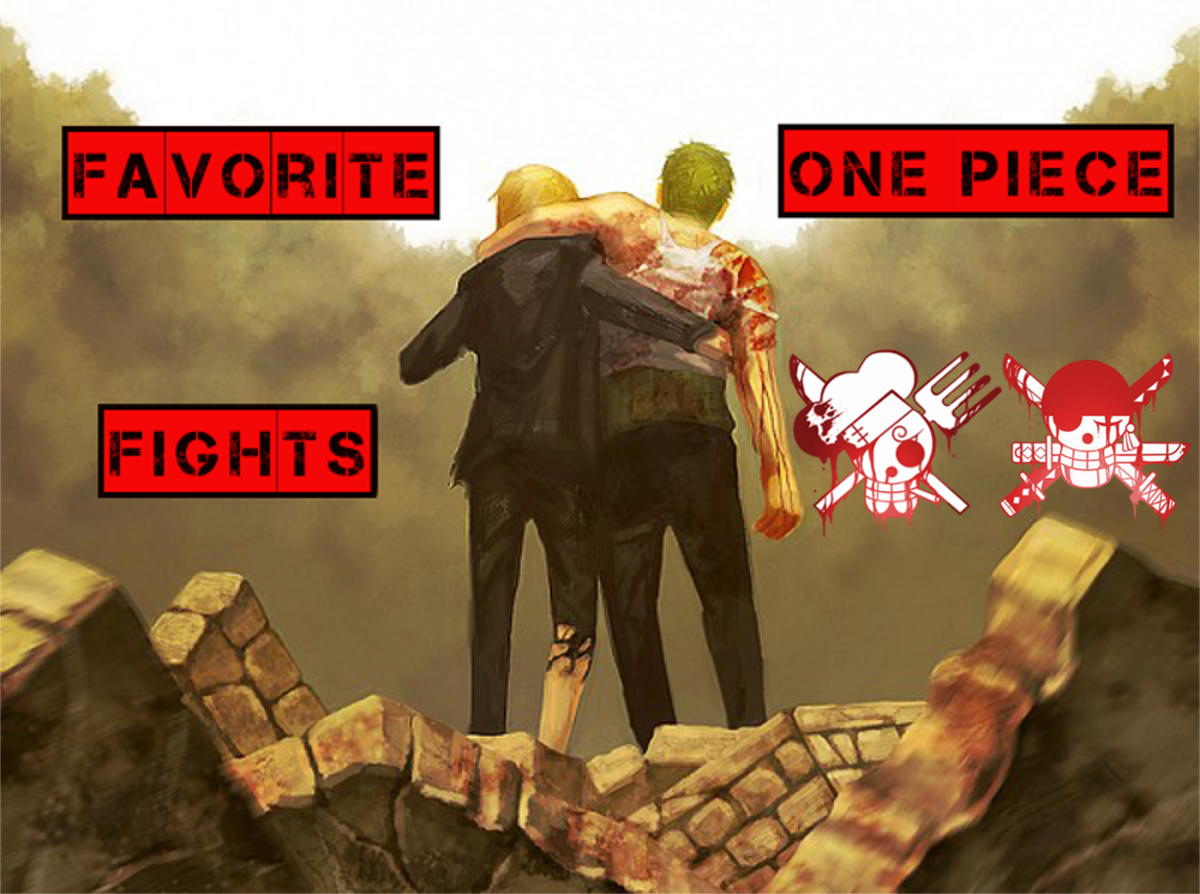 The following post has full spoilers in it. The pictures show a small sample of each

fight, and in the paragraphs below I will go in depth about why each fight is on this list. If you

aren’t caught up or want to avoid any spoilers, come back afterwards to read  this.

While One Piece may just reign supreme as one of the grandest adventure manga ever produced, it still is one thing at its heart. It is a Battle Shonen series. Fights populate each arc quite often, and even at times the congestion of fights is chaos. Oda has always done a splendid job though of building stories around these fights and making them more than just a simple fist fight. While fancy technique may be lacking, he often puts a lot of heart and emotional weight into the majority of his encounters. So, for this list I tried to compile his ten best fights. Although, I did make a stipulation for myself to add the best of each Straw Hat if they had a fight that was good enough. Sadly Robin, Nami, and Brook all fell short of making the list, but the remainder of the crew all does make a spot here. Outside of that, I just ranked them like you would any other list. Round 1, Begin! 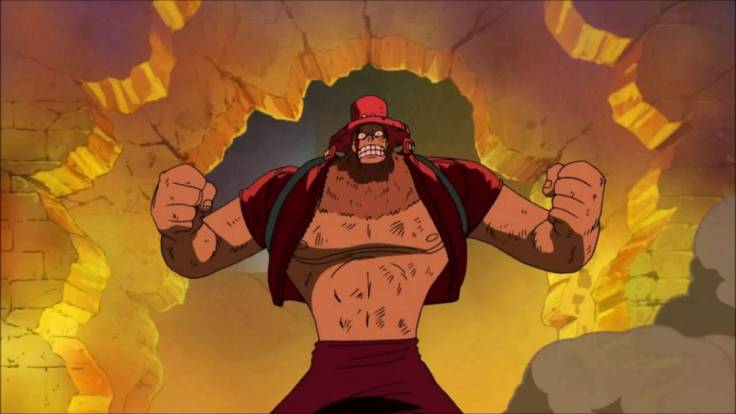 You know, it is a bummer that for a transforming reindeer, Chopper hasn’t had many great fights. However, CP9 versus the crew was easily a highlight for almost all of them. Chopper got pushed so far to his limits in this fight, and really showed his best stuff. I would have to rank it lower though because his beast mode of no control makes the end of the fight less satisfying and more chaos in the already ensuing mess of fights happening. 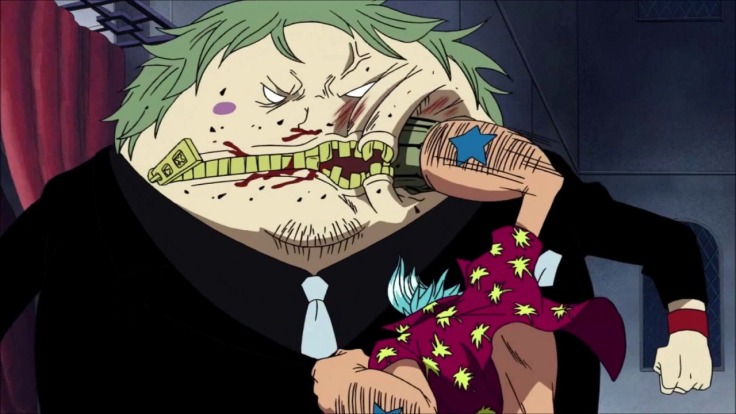 Franky, like Chopper, doesn’t get to strut his stuff very often. For a cyborg with lasers and rocket punches you think he would get more time to shine. Again, his fight during the Enies Lobby section is his best to me. He has a true man to man contest. Brute force boxing match levels of violent strikes one after another make up the bulk of this fight. It really showcases how tough Franky is when push comes to shove. He duked it out and came out on top. 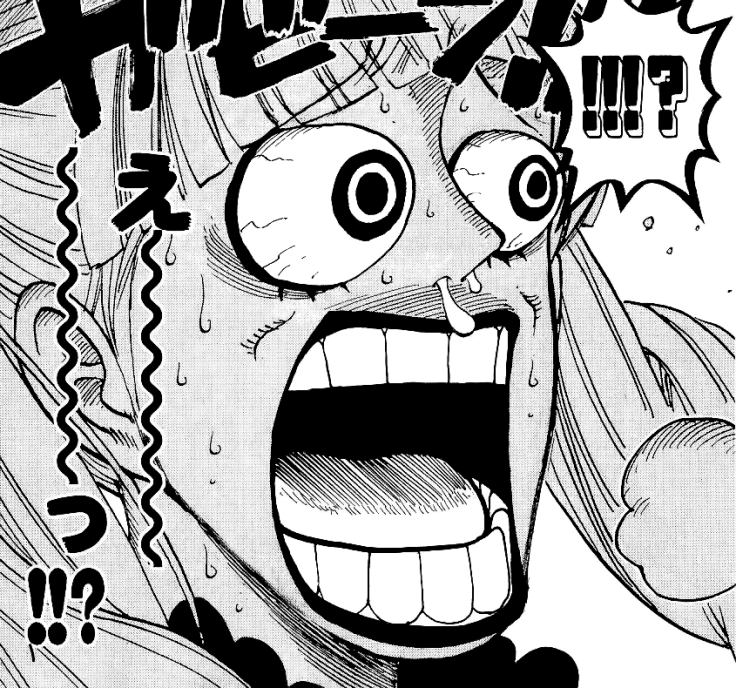 Not all great fights have to be won by the likes of physical superiority though! Usopp is more of a tactician than warrior due to being mostly a coward and unable to fight at that level. However, this makes Oda put him in matches against opponents who don’t win by strength of their blows, but how they control the area around them. Perona saps the fighting energy right out of her adversaries to make them unable to defend themselves, but Usopp is perfect for this job. You see she uses pure negative emotions to her advantage, but Usopp the pessimist he is, was totally immune to her strategy, and comes out on top with what would normally be considered one of his biggest flaws.

Before Crocodile, Luffy had only had to try in a single bout versus Arlong. Crocodile is the person who nearly kills our main character with ease the first time they clash. The rematch between these two has a great build up. Luffy knowing he had lost, and the victor of this fight determining the fate of an entire city. With severe disadvantages going in, Luffy still takes this head on and manages to win out, with still to this day, one of the most thrilling fights in all of One Piece.

Skypiea is one of the most hotly debated arcs in the series. I will back it 24/7 no matter what criticism it receives and I think most of that boils down to the effect Eneru has. He managed to be one of the most ruthless and cunning villains in the entire series, and all of it was done in a secluded area away from the Grand Line. His entire arc is a personal one, and his defeat would mean a monumental victory for the people of Skypiea. And in a twist of fate the man who is fueled with pure narcissism and a god complex is pitted against someone who can take his electric attacks head on. It still manages to be a solid fight too, even with Luffy having the higher chance of winning. 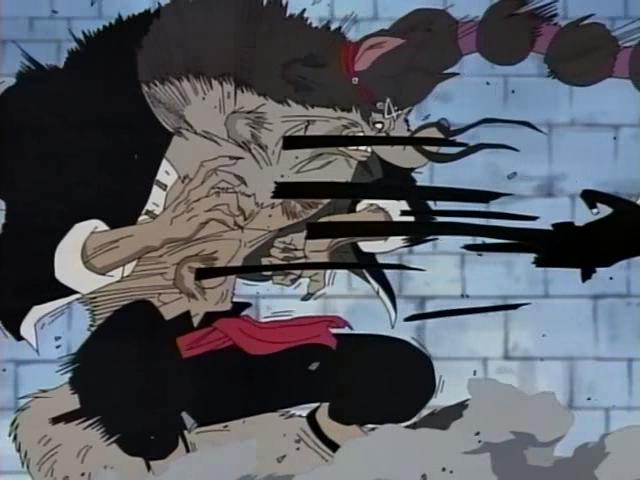 Yep we are back to a CP9 fight! These were clearly some of my favorite showdowns within my favorite arc so it is evident they did something right. Sanji has come into contact with a few worthy competitors to try and best him, but few have come close to making him bow down. Sanji really gets pushed to his limit in this fight, and it even is the premier of what would become part of his signature move pool with the Diambe Jambe. I’ve always enjoyed a fight between characters where they have to go as far as pushing their body to new frontiers just to win. Pound for pound one of the best fights in the series.

I almost put the Zoro v. Kaku fight here, but after reexamining his history I found this to be one of my favorites of all the fights One Piece has produced. An undead master samurai versus an alive swordsman looking for his next worthy adversary. Not only is Ryuma an old character from Oda’s early days of writing manga, but this fight is everything a clash between swords should be. Flashy, fast, and absolutely destructive. Normally I’d choose tense over that, but in a battle series the amount of set pieces you can create with a single fight is worth noting. Zoro and Ryuma create all sorts of havoc in their showdown, and it is fantastic to see them try to one up each other with techniques. It all culminates with Ryuma acknowledging his defeat and praising Zoro for his superior skills, enough so to pass on his sword to him as a true sign of respect. 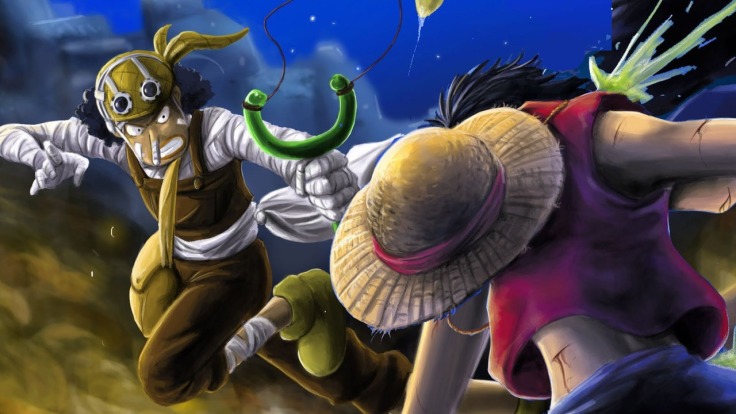 There have been few times the crew has fought with each other in a serious manner. The Water 7 arc though has the best fight between two of them. The emotions are running high with the Merry on its way out. Usopp refuses to let the gift given to the crew by Kaya be tossed aside with fear, that one day, he could be just as disposable. Luffy is in the mind of reality and knows what needs to be done. The clashing ideals cause the two to have a true duel showing their views. This fight really lets us see how much growth Usopp has gained throughout the journey and that he isn’t someone you can just toss away, all the while building a mountain of painful emotions centered around the crew members having to watch their Captain and fellow Nakama fight it out in this violent altercation. 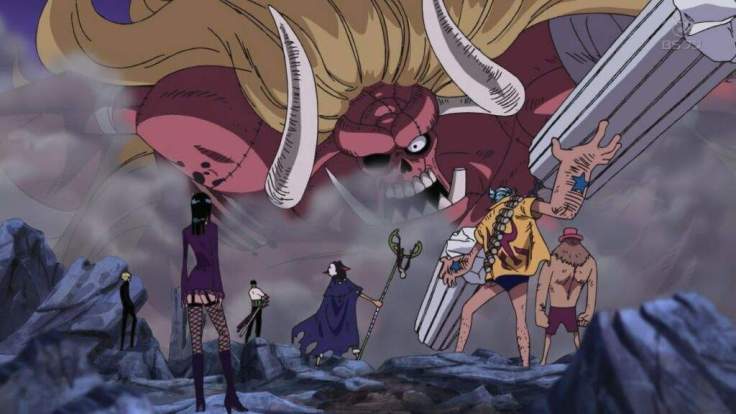 I want to combine these two because of how much overlap they have. Everything from the almost Kaiju battle between Moriah and Nightmare Luffy, to the entire crew taking on Oars all at once. This fight it all kinds of nuts, but it is really the only time in the series all of the members of the Straw Hat Crew had to fight not only together against one foe, but versus Luffy for a temporary time too. Everyone puts out their best effort to defeat the odds and save the denizens of Thriller Bark from Moriah, Oars, and those they work with. We seldom get giant scale fights that also build a ton of tension like this. Easily one of my favorites of the whole series.

CP9 again? You’re god damn right it is! The best arc in the series also holds my favorite fight. Lucci isn’t one of the most vile or reprehensible baddies or anything. People like Doflamingo, Eneru, and Akainu clearly take that role better. He is however a man with a set of ideals he wishes to uphold that are the exact opposite of Monkey D. Luffy. He is also the main leader of a group who are in the way of Luffy saving his valued nakama Robin. He is what stands as the roadblock for the idealism of pirates in the world of One Piece, and in this very moment Luffy particularly. I like Lucci because the way he sees things makes a ton of sense, so when him and Luffy duke it out in a battle of speed and power I got elated to no end. This was the most evenly matched I had ever seen a fight for Luffy. It wasn’t two different powers with pros and cons. This was two men with almost equal abilities, yet a juxtaposition of the way things should be done, fighting with their all. To this day One Piece still creates some fantastic spectacles to behold, but for me this still stands as the greatest fight between two warriors on the Grand Line.

Well that is all folks! Another post for the month of One Piece is as done as the people defeated in all of these clashes. I think this series is really dense in great fights, and I wanted to share some of my personal favorites. Sadly amazing large scale battles like in Marineford and Dressrosa didn’t create as many unique encounters to make this list, but I still love those times regardless of that. That closes off this post for now though, if you have your own list of favorite fights in One Piece be sure to tell me somewhere on the grand web of social medias I use. Until next time see ya my little wanderers!

Hiya! I like to blog about anime what not. I hope you have a nice time visiting the site and be sure to snuggle your pet while doing so. They love that, and even when they don't, they are just hiding their true feelings.

This site uses Akismet to reduce spam. Learn how your comment data is processed.